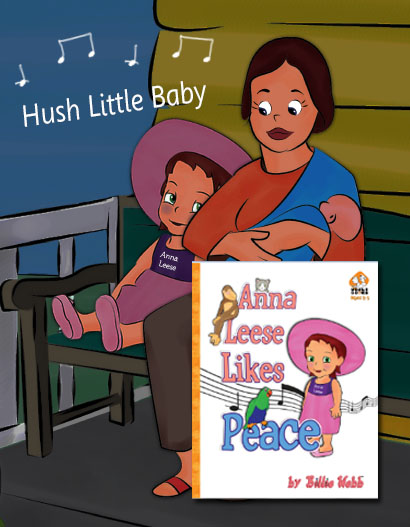 Get it now. FREE.

A young child, Anna Leese, experiences a variety of sounds: silly animal sounds, curious people sounds and noisy baby sounds. Eventually the sounds become overwhelming! Magically, Mommy brings peace to the evening by singing a soothing lullaby that calms Anna Leese and lulls the animals and the baby to sleep.

Click here to get you free Kindle eBook of Anna Leese Likes Peace.

“The illustrations took a lot of time,” Billie Webb explains. “I wanted the images to properly convey the myriad of emotions that the characters experienced.

“I am very happy with the evening scenes. I wanted the transition from noise to peace to become almost magical, and I really think it worked!

“However, not all of the illustrations were successful right off the bat. I did really struggle with the appearance of the mother, and at the last minute I completely changed her appearance! So yes, this book took a while. I did not want to release it until I felt I got it right.”

The Kindle version of “Anna Leese Likes Peace” will be promoted for free for 5 days: July 21 – 25.